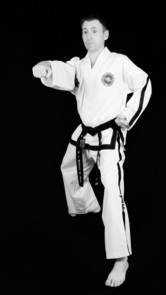 Nationality:               South African
Home Central Club:    Emmarentia Fighting Fit Central Taekwon-Do Club (mentors the instructors at all of the branches)
Affliation:                 MTG Magua Taekwon-Do Group
With 27 years of ITF Taekwon-Do and 34 years all together including other martial arts/ combat sports training behind him including Judo, Tang Soo Do & informally in various other styles, he began ITF Taekwon-Do in 1994 and never looked back.  He is the co-founder of Magua Taekwon-Do Group and Taekwon-Do South Africa as well as President of Taekwon-Do South Africa and the first and currently the only to acheive master status in SA within the federation TSA (Taekwon-Do South Africa) .  He is also the co-founder of Magua Hosin-Sul (Urban self defence syllabus).
He was born to train people to become their personal best.  Martial Arts called to him from a young age and he is privilaged to have been able to build his life and work around his passion.  Himself and co-head, his brother are dynamic and innovative in their approach to all aspects of this art and are known for their inspirational approach.
He graded to 1st Dan in 1997 (SA), 2nd Dan in 1998 (SA), 3rd Dan in 2001(Italy), 4th Dan in 2004(Argentina), 5th Dan in 2009 (SA), 6th Dan in 2014 (Italy) and 7th Dan in 2020 (SA).
Within the competition aspect:
He enjoyed the competitive aspect of Taekwon-Do in his earlier days.  His focus shifted to instructing relatively early due to circumstances also including not having an instructor for some time and his clubs and students development taking preference as his commitments to them grew as the club grew.  He is also the tournament co-director (together with his Wife, Tanya Magua) in charge of Taekwon-Do South Africa's competitions.
He has been a National, International & World medallist, including winning National Taekwon-Do and All Styles Championships.  He has represented his club & country by competing &/ or coaching in international competition eight times.  (World Champs 1997, St Petersburg, Russia; Gen Choi’s Cup 2000, New York, USA; World Champs 2001, Rimini, Italy; Pan American Games 2005, Argentina; World Champs 2007, Birmingham, England; Imperial British Championships 2010, England; World Champs 2014, Rome, Italy; World Champs 2016, Brighton, England; and Head Coach for the 2018 World Champs Team that participated in Buenos Aires, Argentina.  He has also been Head Coach for the National Team for International Competitions 7 times.
He and the club have produced numerous National and International medallists as well as Taekwon-Do South Africa international colours recipiants.
He maintains the true focus of the club is actually traditional and real self defence oriented as a priority aimed at bringing out the best of character in the students.
Norman still maintains that most of his achievements are un-listed because they are actually off the competition floor and in the every day training and traditional and self defence aspects to bring out the best in the members, in all aspects of the art.  Seeing the positive aspects on individuals is the main reason for him choosing this path.
He has also trained and been graded by some of the finest masters in the world including General Choi Hong Hi (Founder) and Grand Master Choi Jung Hwa (ITF President & Son of the Founder).  He is proud to have one of the finest Masters in the world Grand Master Trevor Nicholls 9th Dan (ITF Vice President) as his instructor & mentor.
Back to content